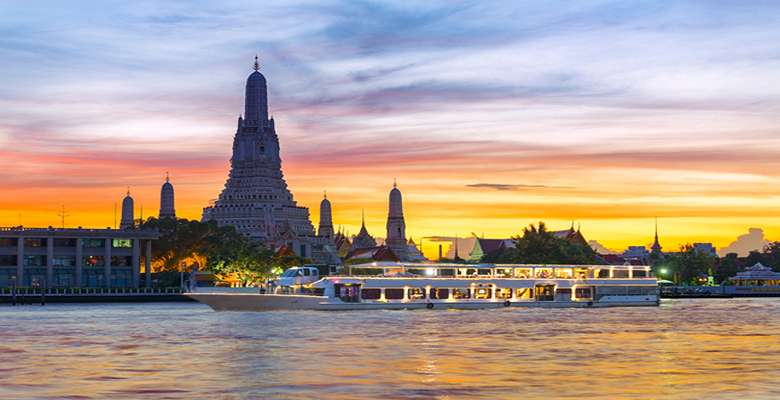 Thailand still ranks among the world’s top tourist hotspots with almost 39 million visitors in 2019 alone! From picturesque mountains to the north, and dazzling beaches to the south, Thailand’s geography is almost as diverse as its history, one of the very few countries to ever avoid complete colonization. This national pride plays itself out in a myriad of ways, most notably in the preservation of historical buildings, artifacts, and a culture that is uniquely Thai.

As always our premier tour experience strives to give you both a comfortable experience, and also one that is authentically local. Towards that end we will be starting with the capital and number one tour destination in Southeast Asia: Bangkok.

Home to over 9 million people, Bangkok is a bustling hive of activity, with ancient architecture standing in stark contrast to the gleaming skyscrapers springing forth all over the city. This burst of modernity is all the more astounding when you consider what great lengths the citizens are going through to maintain their proud heritage, and this provides a wonderful opportunity for travelers to learn about the nation's culture and history all while enjoying present day benefits!

The adventure begins with a tour of the waterways that have guided Bangkok’s history for thousands of years. The Thai region of the Mekong River Delta is one of the most fertile agricultural zones in the entire world, allowing the relatively modestly sized country to out-produce many of their larger competitors with relative ease. These rivers crisscross the city, making water travel an entirely viable and rather unique way for traversing the city. An entire culture has sprung up around these boats, called “floating markets.” While these markets are not 100% floating, the dominant form of transport is still aquatic, and many of the merchants and “food carts” pull up into their spot early in the day to go home at the end of the day. At the famous Amphawa Floating Market, one can experience Thai culture face to face, and enjoy a little piece of what it means to live with such a focus on water.

Moving on, to the steps of the Grand Palace, home to the Thai monarchy from 1782 to 1932. While it is not currently a center of government activity, the Grand Palace still plays an important part as more than just a tourist destination or museum, several royal offices are still located within the building, and many ceremonies take place at the Palace each year. Originally made of wood, the Palace was slowly replaced with brick and stone over the course of several decades, creating a very unique look as the Palace was added to and rebuilt several times over the centuries.

Adjacent to the Grand Palace you will find the Temple of the Emerald Buddha. This religious icon is a visible symbol of the Thai devotion to Buddhism, and is a true work of art. The statue is adorned with season dependent clothing which is studded with gold and jewels, with values that are virtually incalculable.

The ruins of Ayutthaya are the site of the Siamese capital prior to its overthrow by Burmese invaders. This city was once the commercial and cultural crossroads of all of Southeast Asia, playing an important role on the global stage, with many European records describing a dizzying amount of world wealth concentrated into one location. Aside from the ruins, there are several museums to be found, each with their own specialty.

Another stop on our Thai Tour is to the magnificent Summer Palace, also located within the Ayutthaya province. Originally built in 1632, this palace was abandoned after the Burmese invasion, only to be repurposed and rebuilt in the 1800s by the existing Thai monarchy. This complex is a photographer’s dream, with many beautiful examples of Thai construction and history on display, all in a single location!

Chiang Mai is the cultural center of Northern Thailand. For almost 500 years this city was the capital of the Lanna Kingdom before becoming a vassal state to the Kingdom of Siam. Despite this change in power, the city remains an important cornerstone of Thai culture, and is an absolute must-see for anyone adventuring through the country!

Enjoy a walking tour of the city, focusing on not just the ancient teak buildings and pagodas, but also a bustling marketplace tradition that goes back centuries. Between the 1,000 year old buildings, tea parlors, and art galleries the city of Chiang Mai has something for every traveler!

Of course, what is a Thai adventure without elephants? During your adventure you may have the opportunity to take part in an elephant encounter, where you get to see first hand the importance these giant animals play in Thai culture. Indeed, the national animal of Thailand is the elephant!

Using Chiang Mai as your center of travel, you will want to seek out the historic gold coated Temple of Doi Suthep. Further demonstrating their love for the elephant, this temple is dedicated to the White Elephant, a religious relic dated back to the Kingdom of Lanna. An added note: The temple itself is beautiful, and completely plated in gold, but don’t forget to set your back to the building and gaze down the mountain towards the city of Chiang Mai. The view will completely take your breath away, and is a perfect photo opportunity.

Your time adventuring in Northern Thailand might find you at the Hill Tribe Village of Long-Neck Karen. The Long-Neck Tribe are actually refugees from neighboring Burma, allowed to set up a village in Thailand until the conflict is over and it is safe to go home. The Karen people are a tribe known for the placement of ritualistic coils of bronze wire around the necks of the women to help give the appearance of a long slender neck, which is found most desirable in their culture! The Karen people are also well known for weaving, with many colorful textiles for sale. While not a Thai culture, it is still a part of their history, as the conflict between the two countries has been central to much of the rebuilding done throughout history in Thailand.

Far to the south of Bangkok, Koh Samui is an island located in the well protected Gulf of Thailand. Tropical Koh Samui, those luxurious pristine white beaches and perfect climate alone are worth the trip, and with a plethora of adventures to be had, it truly sets itself apart as a world travel destination!

As Thailand’s second largest island, Koh Samui boasts a surprising amount of activities aside from just relaxing at the beach, not that there's anything wrong with a little bit of rest and relaxation! Jungle-shrouded waterfalls, exotic day and night markets, and boat trips to nearby islands all serve to flesh out the experience, and truly allow a person to tailor this stop to their own needs and desires. Speaking of nearby islands, a short skip away is the Big Buddha temple, accurately named for the 39 foot golden Buddha erected on the island in 1972!

Of course where there are beaches there are also water-based activities, so if trekking through the jungles and examining ancient Buddhist temples is wearing you down look no further than the ocean! One such location is the Grandpa and Grandma Rocks, a unique rock formation right on the water’s edge, and well known for its beautiful opportunities for photography!

Whether shopping through Nathon Town or swimming in the Gulf Thailand, Koh Samui will never disappoint you, and is the perfect end to this premier travel opportunity!

As the adventure draws to a close you will briefly bounce back to Bangkok for your goodbyes and departures. As you rise through the clouds above this jewel of the Southeast, reflect back upon all you experienced, and hopefully come visit again someday! The beauty of exploring a new culture is that there is always more to discover, more to experience, and more to cherish!

Please note that our itineraries are ever-changing, see our most up to date Thailand Luxury Tour Packages for more information on the latest itineraries offered.