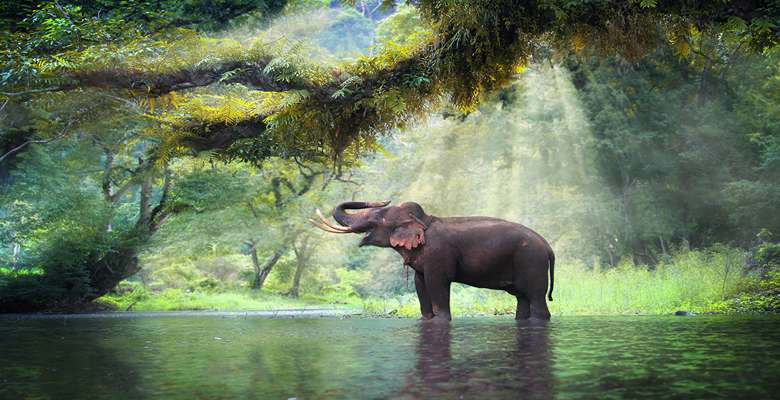 There used to be elephants on the streets of Bangkok. And while this practice was made illegal in 2013 (it’s not healthy for elephants to walk on concrete roads), sometimes you still see mahouts with their elephants on the outskirts of Thailand’s capital city, selling sugar cane and bananas to tourists. Of course, most people don’t choose a Thailand tour because of the elephants. They choose a Thai trip because of the country’s many exotic temples, palaces, and vibrant cities and towns. Bangkok, River Kwai, Ayutthaya, Pattaya and Chiang Mai are just a few of the highlights you’ll encounter on a Thailand Explorer tour.

Where Fun is a Way of Life

Thailand is a country where fun is a way of life. Sanuk, the Thai word for fun, doesn’t just mean fun; sanuk is an ethos. The Thai architect Saut Jumsai put it this way: "If it’s not sanuk, it’s not worth doing. People will resign from a good paying job because it’s not fun.” There’s a reason why Thailand is called the Land of Smiles.

During the Thailand Explorer, you’ll visit the Temple of the Golden Buddha, the Temple of Reclining Buddha, the Grand Palace, Ananta Samakhom Throne Hall, and the Flower Market at Paklong Takut, as well as other cultural highlights. One of the benefits of traveling with Ritz Tours is that a friendly, knowledgeable tour guide will help you get the most out of your Thai vacation. It’s from a tour guide that you’ll learn that sanuk is actually a Buddhist concept, that it’s a reminder of the impermanence of everything -less about having fun (in the traditional Western sense) and more about living in the moment. And it's from a tour guide that you'll learn that Bangkok is called the "City of Angels," but not to be confused with Los Angeles, which has the same nickname.

After Bangkok, your trip continues with stops in Kanchanaburi, where you’ll visit the War Cemetery and the Bridge Over River (hint: watch the film before you board the plane to Thailand), and Ayutthaya, the former capital of Siam. Known as Thailand’s second capital city, Ayutthaya is known for its giant monasteries and reliquary towers. After all the culture and sightseeing, it’s time to kick back for some rest and relaxation in Pattaya, one of Thailand’s most famous Gulf beaches.

The last few days of the trip are spent in Chiang Mai. This place is a culinary paradise. Before you even see the many food markets and street stalls, you'll smell the aromas in the air. No trip to Chiang Mai is complete without exploring its vibrant culinary scene. Be sure to bring your appetite for this leg of the tour!

And while you may not see an elephant on the outskirts of Bangkok, on your last day in Thailand you have the opportunity to visit an Elephant Sanctuary. And yes, it’s safe to say that in the Land of Smiles, even the elephants are smiling.