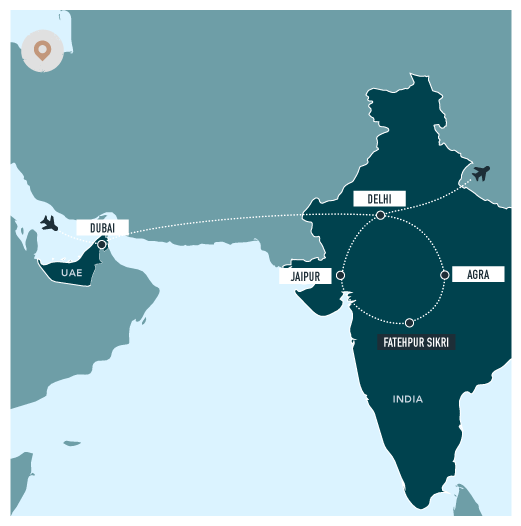 Immerse yourself in the colorful pageantry of India and experience the 21st-century glamor of Dubai on our 9-day journey around India’s “Golden Triangle” and the UAE “City of Gold.” Your incredible adventure takes you first to glitzy Dubai to admire its towering skyscrapers, rich heritage and bustling souks. Next come the bewitching sights and sounds of magical India. Discover the imperial splendors of Delhi, awe at the ethereal Taj Mahal and soak in the pink-hued Rajhastani city of Jaipur.

From $1899 a person - Your customized trip will draw on the expertise of our travel consultants, each of whom has a deep knowledge of the places you wish to explore. 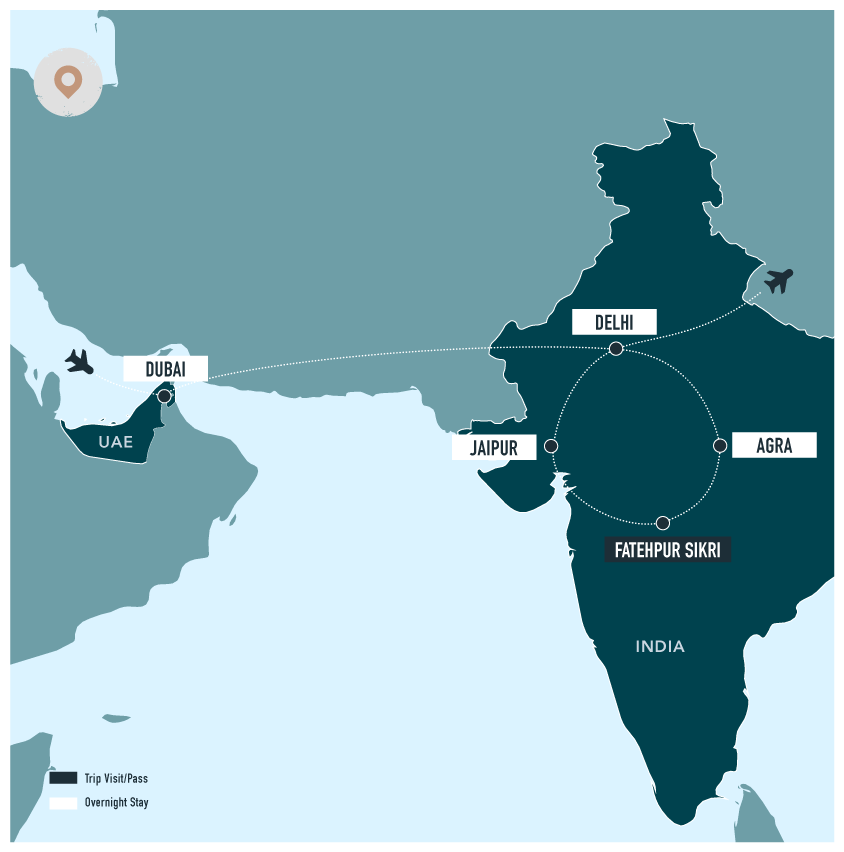 Today arrive in Dubai and meet your Ritz Tour representative at the airport. Then, relax with a comfortable transfer to your hotel in the city and enjoy the remainder of the day at leisure.

Get to know the glamorous “City of Gold” on a full-day sightseeing tour. Situated between the sparkling waters of the Arabian Gulf and empty deserts of the UAE, glittering Dubai is both relaxing and exciting, with its state-of-the-art architecture, cutting-edge leisure amenities and vibrant atmosphere. On your tour, explore both shores of beautiful Dubai Creek, the city’s central waterway, to experience the two contrasting sides of the metropolis – the old town with its charming courtyard houses topped with wind-towers and the glitzy 21st-century city with its cloud-piercing skyscrapers. visits to Dubai Museum and the Dubai World Trade Center, and time to browse the traditional Spice Souk and shimmering Gold Souk. During your tour, stops for photos at the iconic sail-shaped Burj Al Arab hotel and the architectural landmark Jumeirah Mosque. Spend this evening as you wish, perhaps enjoying Dubai’s varied dining scene or relaxing at your hotel.

Discover the bustling metropolis of Dubai with its dazzling skyline and pristine beaches. The Modern Dubai city tour will take you on a magical journey to iconic landmarks . Ride the high-speed elevator to the observation deck on the 124th floor of the soaring Burj Khalifa, the world’s tallest building and Dubai’s showpiece tower. Marvel at the breathtaking views from here down over the city, sea and distant desert, and enjoy the buffet lunch in the iconic Atlantis The Palm, the monumental hotel rising from the man-made archipelago of the Palm Jumeirah. Pay a visit to Dubai Marina , stroll across Souk Madinat Jumeirah and enjoy time to browse for souvenirs and designer goods at Dubai Mall. Spend this evening as you wish, perhaps enjoying Dubai’s varied dining scene or relaxing at your hotel.

Spend this morning as you want before transferring to Dubai airport to board your flight to Delhi. On arrival, meet our local guide and transfer to your Delhi hotel for check-in.

After breakfast, venture into captivating Delhi, the capital of modern India. Split into two districts – New Delhi created by the British in 1911, and Old Delhi, the walled older quarter dating to the 17th century – this wonderful city always beguiles visitors. Today, begin your explorations in Old Delhi, with a walking tour of its maze-like lanes and streets. Visit an age-old silver bazaar, bustling flower market and a Jain temple, and ride a traditional rickshaw to the domed Jama Masjid*, Asia’s largest mosque. Drive past the Red Fort and after a brief visit to Mahatma Gandhi’s memorial at Raj Ghat*, relax over lunch at a local restaurant. This afternoon, take in the imperial elegance of New Delhi. Visit Humayun’s Tomb* and the Lotus Temple of the Bahai Faith*, and drive by the monuments of the British Empire in India, including the India Gate, Presidential Palace, Parliament House and the Secretariat Buildings. Tonight, enjoy dinner at your hotel.

Leave Delhi after breakfast and drive to Agra via the expressway. On arrival, view the major landmarks of this bustling city, including the red sandstone Agra Fort* and enjoy lunch at a local restaurant.

Visit the UNESCO World Heritage site of the Taj Mahal during sunrise. Built by emperor Shah Jahan as a mausoleum for his beloved wife, this shimmering marble building is one of the Seven Wonders of the World, and will take your breath away with its poetic beauty. Envision the painstaking work carried out by the 20,000 men who worked on this wondrous tomb for a full 20 years as you gaze at its marble-inlaid arches, walls and terraces. In the soft glow of dawn, this magnificent building takes on a new, mirage-like character, with the rising sun casting its marble in shifting hues of mauve and pink. After your visit, enjoy breakfast and then drive to Jaipur, stopping to visit the abandoned sandstone city of Fatehpur Sikri, built by Emperor Akbar in 1569 and deserted due to lack of water just 15 years later. Following your visit and lunch at a local restaurant, continue to Jaipur, whose walled quarter is famously known as the “Pink City.” Check in to your hotel afterward and enjoy dinner in its restaurant tonight.

The Trident Jaipur or Similar
★★★★★

Discover the charms and landmarks of buzzing Jaipur today as you learn how its origins lie in the 18th century and the reign of Jai Singh. This morning, head just outside the city to take a Jeep Ride up to the Amber Fort*, a splendid 16th-century hilltop palace with thrilling views over Matoa Lake. After your visit, snap photos of Hawa Mahal – the city’s elaborately beautiful Palace of Winds – before enjoying lunch at a local restaurant. In the afternoon, view the City Palace* and Jantar Mantar Observatory*, a stone astrological and astronomical observatory dating to the 18th century. Also visit Bapu Bazaar and local markets.

The Trident Jaipur or Similar
★★★★★

After breakfast, enjoy the morning free at leisure until driving back to Delhi . On arrival, check into your hotel’s wash and change rooms to relax and freshen up. Enjoy dinner at the hotel this evening and then transfer to Delhi airport at midnight for your return flight to the USA.

Daily breakfast at the hotel

Admission fees to sites listed in the itinerary

Different to your everyday stay, voco™ Dubai on Sheikh Zayed Road represents a world of effortless comfort and convenience, topped with a collection of thoughtful and playful touches, to ensure that your time with us is truly unforgettable. You will see that our intuitive and personable hosts love to bring this commitment to life. All of our 471 guestrooms are recently refurbished with modern décor and considerate extras that make for a comfortable stay.

The Grand New Delhi, nestled in the heart of Delhi NCR, is a distinguished luxury hotel. The ideal destination for the discerning business and leisure traveller, our business hotel in Delhi boasts modern facilities and a resort-like setting with luscious greens & waterscape. The Grand New Delhi is a proud winner of the 'World Luxury Hotel Awards'.

Agra: The Trident Agra or Similar

Agra is home to the magnificent Taj Mahal, one of the Seven Wonders of the World. Part of India's rich history since 1000 B.C, the city was first referred to as 'Agra' by the Greek philosopher, Ptolemy in 200 A.D. Agra first rose to prominence as the capital of the Mughal Empire in the 16th Century. Many of the city's acclaimed heritage sites date back to this five star era of India’s history, including the resplendent Taj Mahal. Carrying the best of the Mughal Empire’s artistic heritage into the present day, the streets of Agra are dotted with ancient buildings existing in happy harmony with luxury hotels, shops and modern day houses. From its fine marble inlay artwork to its delightful sweet shops, the city offers much to cherish.

Jaipur: The Trident Jaipur or Similar

Resplendent in the hues of its magnificent past, Jaipur is one of the most vibrant, 5 star destinations in India. Surrender to the charms of this beautiful city when you stay in Trident, Jaipur; ranked amongst the best resorts in Jaipur. Located en route to the famous Amber Fort, this luxury hotel offers stunning views of the Mansagar Lake and Jal Mahal.