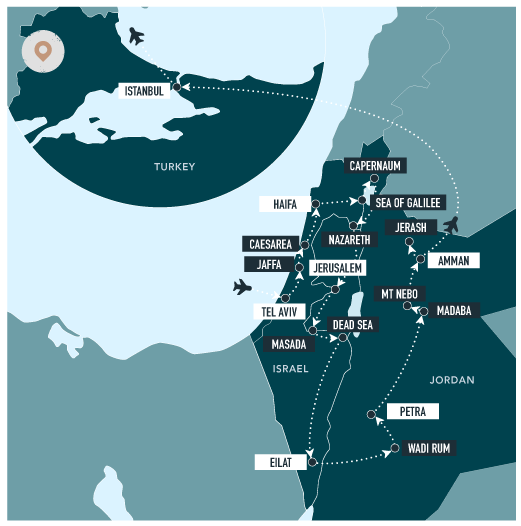 Travel to Jerusalem, Petra and Istanbul and discover their history and highlights on this 15-day voyage around Israel, Jordan and Turkey. Experience Israel’s haunting biblical sites and stories in Jerusalem, Bethlehem and Galilee on a 5-day adventure before taking a swim in the Dead Sea and spending four nights in beautiful Jordan. Here, marvel at the ‘Rose Red City’ of Petra and desert mountains of Wadi Rum before diving into buzzing Amman and touring the UNESCO-listed Roman ruins at Jerash. Finish with three nights in Istanbul, where teeming bazaars and ornate palaces huddle along the bustling streets and breezy Bosphorus. 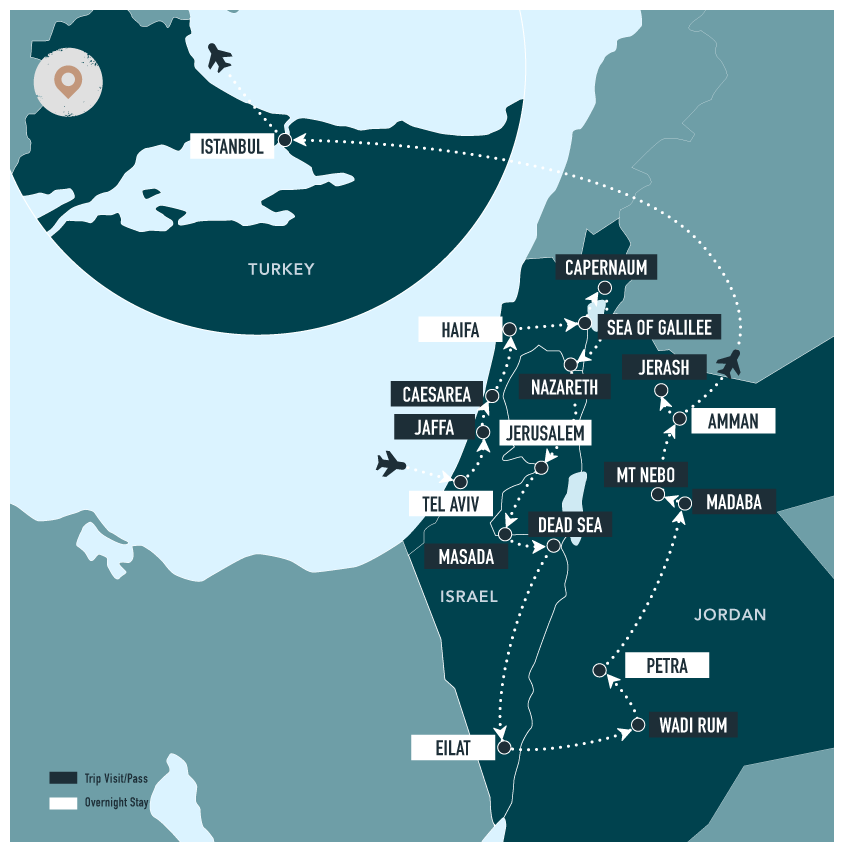 Board your US flight bound for Israel. Your flight may include international stopovers.

Land at Israel's Ben Gurion Airport and meet your representative. Then, enjoy a convenient transfer to Tel Aviv, sometimes known as the ‘White City’ for its abundance of white-painted Bauhaus-style architecture. After checking in at your hotel, the rest of the day is yours to get a flavor of Israel's second biggest city.

After breakfast, enjoy a morning sightseeing tour of Tel Aviv and Jaffa. View Tel Aviv's highlights and see the restored ancient port of Jaffa as your guide charts its long list of imperial rulers, from the Romans to the British. Next, trace the coastal road to Caesarea, a powerful city in Roman and Crusader times. Explore the ruins, including the amphitheater and other Mediterranean-side relics, and delve into the remnants of the 900-year-old Crusader city. Next, continue to Haifa, whose history extends to the biblical era, and visit the Bahai Gardens, a magnificent terraced garden circling the gold-domed Shrine of the Bab, the world center of the Bahai faith. Conclude the day with a visit to the German Colony, the first colony established by German Templers in the Holy Land.

Make the scenic journey to the Sea of Galilee, where Jesus is believed to have had his ministry and walked on water. Stroll the lakeside remnants of Capernaum to see ruins of what's reputed to be the home of St. Peter, and visit Tabgha, where it's held that Jesus performed the Miracle of the Multiplication of the Loaves and Fishes. See the church built on the miracle spot before visiting the Church of the Beatitudes, where it's believed he delivered the Sermon on the Mount. Following lunch in Tiberias, enjoy a boat ride on a replica of a Galilean fishing boat from Jesus' time, and continue to Nazareth to view the contemporary Church of the Annunciation. Finally, drive to Jerusalem, one of the world's oldest settlements, for a 3-night stay.

Old Jerusalem awaits today, with a morning tour of its world-famous sights—many venerated across the faiths. Admire the sweeping vistas over the city's rooftops from the Mount of Olives before heading to Mt. Zion to visit the Upper Room, the believed site of Jesus' Last Supper, and the Tomb of King David. Next, delve deep into Old Jerusalem, entering via the Zion Gate and seeing the Roman Cardo and other fascinating sites. After lunch, see the Western Wall, known as the ‘Wailing Wall’—held holy by the Jewish people—and walk part of the Via Dolorosa, where Jesus is said to have carried his cross. Lastly, visit Calvary and its Church of the Holy Sepulchre, built on the believed site of Jesus’ crucifixion and burial.

Today begins in Bethlehem, the reputed birth town of Jesus, with time at the Church of the Nativity, traditionally held to mark his birthplace. Continue to the Milk Grotto, Shepherd’s Field and other sites and then return to Jerusalem to visit Yad Vashem, the Jewish National Memorial to the six million Jewish people killed in the Holocaust. Visit the Holocaust History Museum, Children's Memorial and a memorial service, and afterward, explore the Israel Museum, where you'll see its incredible 50:1 scale model of Jerusalem during the Second Temple era.

Bid farewell to Jerusalem and cross the Judean Desert to Masada, site of a majestic rock-top fortress built by King Herod in 35 BC. Ride the cable car to the ruin-strewn plateau and inspect the relics as your guide tells of the Jewish zealots who fought to the death or committed suicide here in 66 AD rather than surrender to the Romans—an event hugely symbolic to the Jewish people. Next, continue to the Dead Sea and enjoy time to float in its salt-rich waters before traveling to Eilat on the Gulf of Aqaba.

A day of incredible natural scenery begins as you cross the Arava border into Jordan for Wadi Rum, a UNESCO-listed wilderness of desert peaks, valleys and dunes immortalized in the movie ‘Lawrence of Arabia.’ Take an exciting 4x4 guided drive through the red-hued mountains and gorges, stopping at hidden oases, natural springs, and an ancient Nabataean temple. Afterward, continue to Petra for a 2-night stay.

After breakfast, explore UNESCO-protected Petra, the rose-red city carved into a gorge by the Nabataeans 2,500 years ago. Start your guided tour on foot or horseback before entering Petra via the Siq, a narrow rock fissure that suddenly opens onto your first glimpse of the glorious Treasury. After admiring its timeless façade, head deeper into the gorge as it reveals royal tombs, an amphitheatre, and other ancient rock-hewn monuments.

Today strike westward to Madaba, known as the ‘Mosaic City’ for its stunning Byzantine-era church mosaics. On arrival, enter the Church of St. George to admire the prize mosaic—arichly detailed 6th-century floor map depicting the Holy Land and Jerusalem. Then, make tracks for Mt. Nebo, where it’s believed Moses first saw the bible’s Promised Land before drawing his last breath. Take in the panoramic views from the top, which on clear days extend to Jerusalem and the Jordan Valley, before continuing to Amman.

Look forward to a full day of discovery today, starting with a tour of Jordan's vibrant capital. View the city's main landmarks, including the Roman amphitheater and Citadel, and then travel onward to the stunning, UNESCO World Heritage site of Roman Jerash. This once-flourishing city was one of Rome's Decapolis (Land of Ten Cities) and is one of the best-preserved of its kind in the world. Marvel at the columned Oval Plaza, streets, temples, and theaters before heading back to Amman where this evening brings a delicious farewell dinner with your fellow travelers.

Transfer to the airport to board your flight to Istanbul, the capital city of Turkey. Upon arrival, you are greeted by your local representative and transferred to the hotel for check in. Free at leisure for the rest of the day.

After breakfast, enjoy a full day city tour of Istanbul with visits to the Blue Mosque, one of the most important temples of worship in the world, the extraordinary Hagia Sophia Cathedral, the dramatic and beautiful Underground Cistern, built in the 6th century as a secure water reservoir for the city, the Topkapi Palace,, lavish home of the Ottoman Sultans and the 17th century Spice Bazaar . Enjoy dinner at the local restaurant.

Another full day city tour with visits to the famous Grand Covered Bazaar, the largest covered marketplace in the world with 4000 shops, and private Bosphorus cruise to get an overview of Istanbul. Enjoy a leisurely exploration of this historic channel between Europe and Asia. Disembark the boat on the Asian side to explore the lovely neighborhood of Kuzguncuk, once the center of Jewish, Armenian and Greeks . Then visit Kadikoy, the fish market, bookstores and souvenir shops. Return to the European side and visit a cafe where Baklava is made. Enjoy dinner at the local restaurant.

Transfer to the airport to catch the flight back to the US.

All first class hotels as listed, or similar.

Admission fees and special transportation included for sightseeing attractions, including round-trip cable car ride in Masada, 2 hours jeep tour in Wadi Rum, horseback ride in Petra, as per the itinerary.

Luggage handling of one piece per person at hotels where available.

First-class air-conditioned coach touring with professional drivers. A bottle of mineral water per person per day.

Private boat for the cruise on the Bosphorus.

Guaranteed departure with a minimum of 15 guests

To make this a private tour, please contact us for pricing.

The Dan Panorama Hotel Furnished with contemporary flair and highlighted by splendid views,  across the street is the Mediterranean sea. The hotel features elegantly appointed guestrooms that blend luxury with the efficacy of advanced technology. With a huge pool and sundeck, premium leisure-time facilities and dining options, as well as all the dynamic and sophisticated attractions of Tel Aviv on its doorstep

The hotel adjoins the city’s upscale Panorama Mall. The views from this perfect Haifa hotel are simply spectacular, You can have 360° Panoramic views of the Mediterranean Sea and Mount Carmel. The renovated guestrooms sport an elegant and sophisticated décor, while the public areas are ideal for relaxing. The pool area offers great views, and there is also a fitness center with a sauna.

Designed around a series of beautiful patios, the Dan Jerusalem Hotel sits on the historic slopes of Mount Scopus, overlooking the famous Jerusalem skyline and the rolling Judean Hills. Hotel features a selection of gourmet restaurants and a bar. There is also a heated indoor pool, and a fully equipped spa offering a wide range of health and beauty facilities.

Ideal for a vacation that blends sun and fun with Eilat's spectacular natural attractions, the Dan Panorama Eilat Hotel is splendidly located overlooking a tranquil marina where sailboats anchor. A premium Eilat hotel with contemporary style guest rooms and suites - all with private balconies - where everything is planned for your enjoyment and every modern comfort is featured.

The Hyatt Zaman Hotel & Resort Village is one of the most attractive places in Jordan where tourists meet and enjoy their stay in the country. Hyatt Zaman provides the ideal place for visitors who wish to explore Petra while at the same time offering modem recreational facilities and entertainment in an authentic late 19th century Jordanian village.

Nestled in the heart of modern Al-Abdali, the past meets the future and the traditions and history of Amman, Jordan, are instilled with unmistakably vivid design. As one of the newest five-star hotels to launch in the country, glam up your stay with stunning views of the Jordanian capital and its seven hills. Enter our hotel through an intriguing canyon walk, which is a breathtaking recreation of the ancient city of Petra, one of the Seven Wonders of the World.

The elegant Doubletree by Hilton Istanbul Old Town enjoys a prime position in central old Istanbul, opposite a tram stop and within easy reach of the Topkapi Palace and Grand Bazaar. The glamorous public areas give way to four top-notch restaurants and bars, a marble Turkish bath, gym, sauna and treatment rooms. Enjoy a spacious standard room with super-comfy beds and hypo-allergenic pillows, satellite LCD TV and coffee and tea facilities, plus a minibar, work desk and luxurious en-suite bath or shower room.