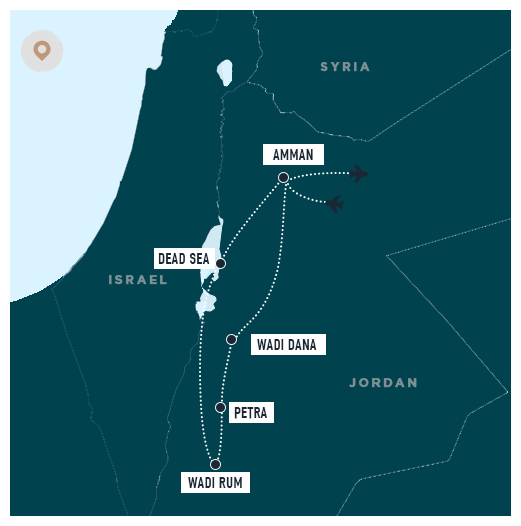 Experience the majesty of Jordan on this 11-day tour into the heart and history of this awe-inspiring kingdom. Absorb the ancient treasures and friendly culture of capital Amman, witness the wilderness of Wadi Dani nature reserve and marvel at the rock-cut city of Petra and red mountains of Wadi Rum, where you sleep in a luxury tent. Add visits to Roman Jerash, biblical sites, desert castles and more—along with time at the therapeutic Dead Sea—and you’re in for a truly enriching adventure.

From $2600 a person - Your customized trip will draw on the expertise of our travel consultants, each of whom has a deep knowledge of the places you wish to explore. 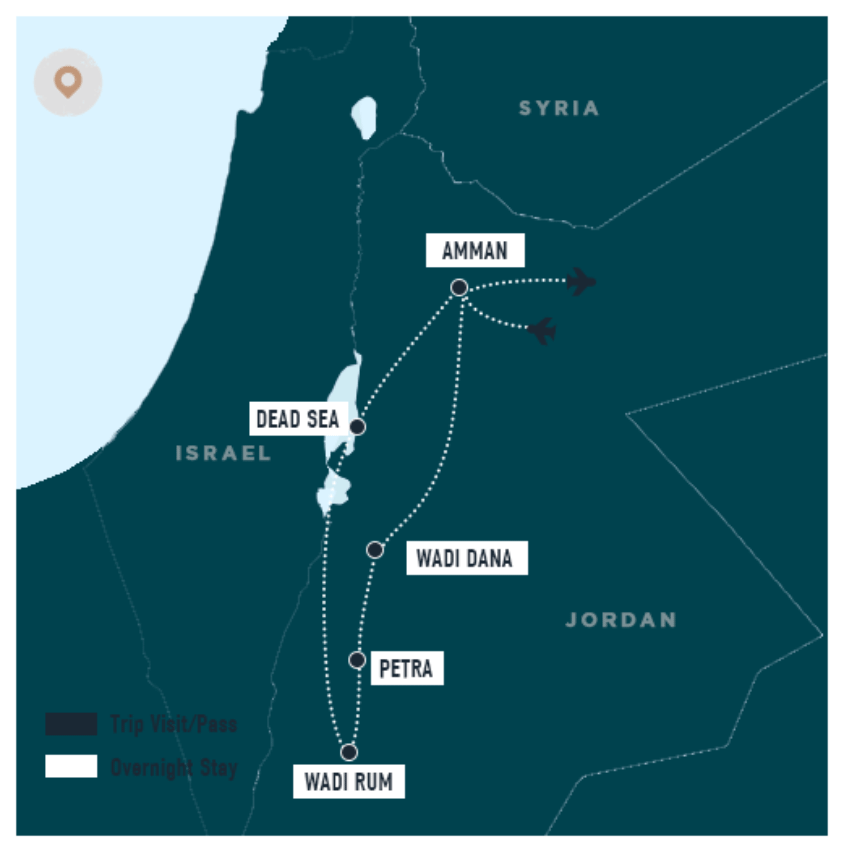 Arrive at Amman’s Queen Alia International Airport where you’ll be met by our representative and transferred to your downtown 5-star hotel. After check-in, make the most of today to relax, perhaps discovering Jordan’s lively capital by heading out for dinner or to explore its bustling shops.

A largely modern metropolis, Amman also has plentiful historical treasures. After breakfast, set out on a walking tour to experience the sights and culture of this fast-moving city. Discover Jordan’s rich biodiversity at the Royal Society for Conservation of Nature, an organization dedicated to preserving the kingdom’s natural reserves. Next, absorb the street life and buzz of downtown Amman on a guided stroll. Delve into the Gold Market, see the Al-Husseini Mosque, and continue via the Vegetable Market to the 2nd-century Roman Nymphaeum—once the main public fountain. Admire the restored 6,000-seater Roman theater and after visiting the Jordan Folklore Museum, head for the Citadel to see its Roman, Ummayad and Byzantine ruins. The remainder of the day is free: perhaps stroll Rainbow Street to enjoy its colorful shops, cafes and restaurants.

Drink in Jordan’s rugged landscapes as you follow the desert highway to Kerak*, one of the country’s best-preserved Crusader castles. Tour what remains of this 12th-century fortress, which stands atop fragments of earlier citadels built by the Nabatean peoples. After seeing Kerak’s highlights, continue to Wadi Dana*, Jordan’s largest nature reserve. Check in to your accommodation in this beautiful spot and enjoy dinner here this evening.

Relax over breakfast as you look forward to a day exploring Wadi Dani*—whose stunning mountains and wadis (dry river beds) extend to Wadi Araba’s deserts. Choose from various experiences on offer to visitors, from guided hikes (own expense) and independent walks through the canyon scenery and local villages. A box lunch is provided for sustenance. Later, transfer to your hotel in Petra, your base for two nights.

This morning, head for Petra*, carved by the Nabateans in the 4th century BC. Designated a UNESCO World Heritage Site, this ancient rock-hewn city is one of the world’s greatest archaeological treasures. Follow your guide through the Siq—the natural rock fissure leading inside—and marvel at the Al-Khazneh Treasury, Street of Facades and ancient theater and royal tombs. Hear how Petra was a trading hub controlled by the Nabateans and then leave the main route for the Al-Khubtha trail, a series of cliff stairways leading to a high viewpoint above the Treasury—the vista from here is considered Petra’s most spectacular. This evening, attend the unforgettable Petra Night Show*. Walk the illuminated Siq to the Treasury and absorb the magical setting by the light of over 1,500 flickering candles—an unmissable experience. A horse ride into Petra is included on your visit today.

Today, explore Little Petra (Siq Al-Barid), a smaller site just north of Petra. Historians believe this narrow canyon, honeycombed with water cisterns, tomb frontages and dwelling spaces was a suburb of Petra located at the confluence of ancient caravan routes linking Wadi Araba with Gaza, Egypt and the Mediterranean. See the classical temple at the Siq and the cave-like spaces that provided long-ago merchants with places to stay. Next, transfer to Wadi Rum and stay overnight in a luxury tented camp fringing this awe-inspiring desert reserve.

Start early with a thrilling 2-hour 4x4 tour of Wadi Rum*. This UNESCO-listed wilderness boasts red-hued mountains, steep gorges and desert plains; and is scattered with sites connected to the British intelligence officer, Lawrence of Arabia, who stayed here during the 1914-18 Arab Revolt. View its ancient rock carvings, springs, rock formations and Nabatean temple as your driver-guide explains their backstories. Once your tour finishes, leave for Madaba and its Church of St. George, home to the famous Madaba Map. Dating to the 6th century, this mosaic floor map is the oldest known image of the Holy Land and is extraordinary for its detailed depiction of Jerusalem. From here, move on to Mount Nebo, where it’s believed Moses first saw the Promised Land, before continuing to the Dead Sea, the lowest point on Earth. Spend the afternoon and evening at leisure at your 5-star resort and spa hotel.

Enjoy the Dead Sea as you wish this morning. Float in its salt-rich water, lounge by your hotel pool or wallow in a mineral beauty or spa treatment (own expense). At noon, meet your guide and visit the believed location* of Jesus’ christening by John the Baptist at Bethany beyond the Jordan. Set on the River Jordan’s eastern banks, this revered place is a major pilgrimage site. Afterward, transfer to Amma where the afternoon is yours to relax or explore in your own way.

Today brings a trip to Jerash* and Ajloun Castle*. Admire the UNESCO-protected ruins of Jerash*, one of the world’s best-preserved Roman cities, including its Oval Plaza, temples and theaters as your guide charts how it was one of Rome’s Decapolis—“Land of Ten Cities.” On route, stop to see Ajloun castle, built under the rule of Saladin in the 12th century. Back in Amman, maybe use your last afternoon in Jordan for last-minute shopping.

After breakfast, transfer to Queen Alia International Airport for your homebound flight.

Daily breakfast at the hotel, guest house or camp, 1 lunch box, 2 dinners (please note drinks are not included during meals)

Horse riding in Petra as part of the entry ticket

Luggage handling at the airport and the hotels

Private deluxe air-conditioned coach with the professional and experienced driver

One bottle of water per day will be provided

Nestled in the heart of modern Al-Abdali, the past meets the future and the traditions and history of Amman, Jordan, are instilled with unmistakably vivid design. As one of the newest five-star hotels to launch in the country, glam up your stay with stunning views of the Jordanian capital and its seven hills. Enter our hotel through an intriguing canyon walk, which is a breathtaking recreation of the ancient city of Petra, one of the Seven Wonders of the World.

Dana Guesthouse Perched on the edge of the precipitous cliffs of Wadi Dana, this beautifully styled building merges elements of village vernacular architecture with more modern elements, creating a structure with a definable Arabic character, unlike any other in Jordan, offering breathtaking views of the reserve. Deluxe rooms have a private bathroom, adding character and ethnicity to the entire experience. The Guesthouse was originally meant to house researchers, all the rooms have private terraces that offer spectacular views of the surrounding Wadi and mountains.

Set in Wadi Musa and with Petra reachable within 1.9 km, The Old Village Hotel & Resort, situated on the outskirts of Wadi Musa, overlooking the Shahara Mountains, home to the fabled UNESCO world heritage site of the rose-red city of Petra. All rooms have Wi-Fi access, tea and coffee making facilities, television, air conditioning, safe deposit box and a mini bar. The bathrooms are well equipped with bath/shower, hair dryer and complimentary toiletries. The rooms are furnished to reflect the history and culture of the area and to showcase local handicraft skills.

Mazayen Luxury Camp is a luxury property located in the heart of the desert and so close to old village of Wadi Rum. Its encircled with a wide garden and trees and having a marvelous mountain view and give you an ultimate opportunity to watch the sky and stars in addition to experience the amazing sunset and sun rise. Its surrounded by splendid sandstones and superb hills all around.

Martian tent ( Bubbles )
Martian Domes”, “Star pods” or “Bubble Tents” – they are the ultimate way to stay! They create an outerspace experience in the vast and empty desert. Martian tents have a transparent panel designed for stargazing in the clear desert sky. Meanwhile, others go the extra mile with a transparent roof! Be prepared that neither design provides much privacy – but the view is worth it!